Welcome to the Total Noob’s Guide to Writing Fiction!

Your first lesson will be on verbs.

“Wait a second,” you say. “I know what a stupid verb is. I don’t need to learn about verbs. I want to learn about how to create strong characters and vivid settings!”

Slow down there, skippy.

You must learn to crawl before you can fly, my young pupil. So strap on your helmet and zipper up your big girl pants. It’s about to get real.

A verb is an action word. To be (or not to be). To die. To sleep. To dream. Aye, there’s the rub. Any complete sentence must contain a verb. No verb, no completeness.

That was easy, right? Pfftttt verbs are simple.

There’s a reason I split this into parts. How many parts? ONLY GOD KNOWS.

How do I use verbs effectively?

Here’s the thing. Verbs are the most important part of speech for you as an English-speaking writer to understand. Having an in-depth knowledge of verb sorcery will allow you to accomplish the following:

Among other things, but who has time to list them all?

Ain’t nobody got time, apparently.

What You Should Have Learned in High School

English has a buttload of verb conjugations, most of which you should have been taught in high school. You probably use plenty on a regular basis, but you probably also never use plenty, ever.

That’s about to change!

Verb conjugation is what determines tense. When I say “conjugation,” I’m talking about the difference between “I walk” and “I walked” and “I will walk.” Each of these actions happens at a different time: present, past, and future (respectively).

There are some things that look like verbs (like infinitives and gerunds) that don’t actually function like verbs. I won’t cover those just yet. I’ll save those for later.

In creative fiction, present tense narration (popularly done in first person POV) is used to lend a sense of immediacy to the story. The reader experiences events at the same time the character does, which also creates a question about whether the character survives the story.

I eat my yummy lunch.

He walks down the sidewalk.

They say mean things to giraffes.

Since English is such a fun, making-sense language, the simple present tense can also be used to express the future.

Our vacation ends next week.

Or used to express universal truths.

Birds fly south for the winter.

Or used to explain habits.

Every day, I take the bus to school.

Whoa past participle? What the foo is that? What does that even mean? I thought you said this was for idiots!!!

Relax. Past participle is just when you end a verb with -ed. Looked. Pushed. Danced. This is not the case with weirdo verbs like to speak (because “speaked” is not a real word), but the word “spoken” counts as past participle.

Present perfect expresses actions that happened at an indefinite time.

He has walked around town.

Or actions which began in the past and continue to the present.

They have said unkind things for months.

Or when an activity has an effect on the present moment.

I have already eaten.

Do not make the mistake of using a noun after “have/has,” because that changes the sentence entirely (and also changes what the verb is).

For example, in the sentence “I have found this humerus,” if we rearranged the sentence to move a noun after “have,” we’d end up with “I have this humerus.” The meaning of the sentence has changed; also, “to find” is no longer to verb, but rather “to have.”

(It should be noted here that when referring to English verb tenses, the terms “progressive” and “continuous” mean the same thing.) I’ll use progressive because that’s what I’m used to.

A verb that ends with -ing is a progressive verb. These can be easy to confuse with gerunds (which are -ing verbs that are in use as nouns), which will be covered later.

He is walking around town.

Or long-running action that is happening now and will continue into the future.

They are studying more effective ways to offend giraffes.

Or to talk about tendencies or trends.

I am watching what I eat for my diet.

Do not make the mistake of inserting a noun after “is/are/am,” because that changes the sentence completely. 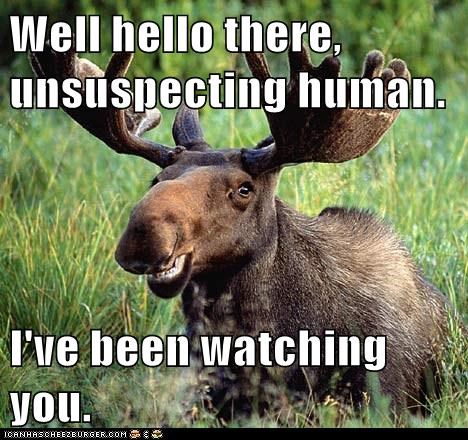 I have been watching.

Present perfect progressive takes the best of all present worlds and squishes them together in a SUPERTENSE!

Present perfect progressive is used to express actions that began in the past and continue to the present.

They have been saying unkind things for months. (and presumably still are)

Or past actions that have very recently stopped.

He has been walking around town all day. (and infers that he is no longer walking)

Or temporary actions or situations.

I have been eating nothing but lettuce leaves for my diet.

“Hold on for a second, Taylor,” you may be saying. “Present perfect progressive looks an awful lot like (simple) present perfect.”

Yes they do. Thanks for noticing!

Both of these tenses can be used for when an action began in the past and is continuing into the present.

They have said unkind things for months.

They have been saying unkind things for months.

These, essentially, say the same thing: there are some jerks that have been talking smack for a while and still are.

A lot of the time, these tenses can be interchangeable. Not always, though. The secret to differentiating these two tenses comes when you figure out what you as the writer would like to emphasize.

If you want to emphasize the action, use the continuous form.

We have been working very hard.

If you want to emphasize the result of the action, use the simple form.

We have earned a lot of money from working hard.

Also, if you use the words “never” or “ever,” use the simple form.

Most people do not speak with proper grammar, but instead use colloquialisms that they know are incorrect but make sense anyway. And there’s nothing wrong with that. But it takes practice and training to erase those colloquialisms from written communications. Every category link above will take you to EnglishTenses.com, and they have exercises there (as well as videos!) to help you understand the intricacies of English verb tenses.

That’s it for this installment of the Total Noob’s Guide! Stay tuned for Part 2: Past Tense Verbs, coming… soon?

Follow Taylor L Scheid on WordPress.com
This is just my blog. I run amok on other sites, too! My website!